You are here: Home1 / Band Performance

The definition of a “Band” is the coming together of a few people who practice their art together. They are generally friends, class mates and colleagues. They come together as a band and practice in order to make it good enough for themselves and an audience.

All the great bands – The Beatles, The Rolling Stones, Led Zeppelin, Pink Floyd, ABBA, Bee Gees, Aerosmith, AC/DC, Coldplay, Fleetwood Mac, Guns N Roses, Nirvana, Backstreet Boys, Eagles, Bon Jovi, Maroon 5, Linkin Park, U2, One Republic – started small. They started off in a garage or a small room. They probably had just 2 guitars, a drum, a keyboard and a vocalist.

The members of the great bands had the urge to spend hours together practicing, composing and playing music together. They continued playing for many years, while producing and performing music that drives people crazy even decades and centuries later. These were not musicians who had aristocratic musical training like Mozart, Beethoven or Stravinsky. They were more the “aam aadmi” that wanted to express their emotions. They wanted to do it without any rules and laws in ordinary everyday language; not the ‘uppity’ intellectual kind. However, they rocked the world and they still do.

BOOK your appointment NOW for your Musical Evaluation session.

So when you want to call something a “Rock Band”, don’t get too hung up on definition. A Band could include even a Piano, a Violin, and an Opera Singer today. It can include anything that has the energy and the beat. Anything that creates the energy to make the players / musicians and the listeners / audience go wild!

HOW TO BECOME A SUCCESSFUL MUSICIAN IN A BAND? 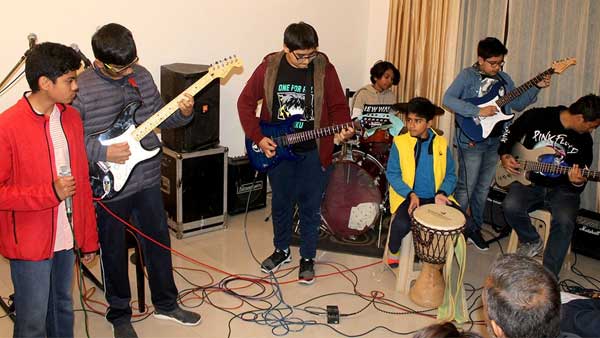 Let me tell you a true story. I knew of a highly talented young lad named Johnny who knew just two chords on his guitar. He could sing very well. He did not have much education. I do not think he had even passed the 10th standard when I first met him. He had the makings of a star, but lacked musical knowledge and education. All he wanted to do was to become a professional singer and a band member.

With all my knowledge and education in music, I advised Jonny. I told him to study and get into mainstream education or to learn music professionally. However, Johnny just strummed and strummed his guitar, and sang the whole day long, dreaming and imagining his future.

Many years passed. Johnny then had a break. He learnt music in one of the former U.S.S.R. / Soviet republics. I met Johnny after many, many years. He is now based in Kazakhstan and is a part of a very successful band. Moreover, he is also earning his living well and is quite well to do in life.

I have met and have known many others who tried like Johnny. But they never made it either in music or in any other profession. Most youngsters dream to be stars as it appears very glamorous and cool; but only a few can make it. You will never know until you have a go. However, you should take a calculated risk.

Start well, learn intensively, practice hard, evaluate yourself and your success, have fun playing with the band. Make some money before thinking of making this your career. Perform in public and test out the potential of the magic. Then immerse yourself completely, giving it your 100%.

The best bands that had the magic were willing to give it everything they had. They are The Beatles, Rolling Stone, etc to name a few. There are millions of people with talent, but only a few can become stars.

We can show you how to be a part of a band. We can give you a platform to showcase your talent in a band when you are ready.

Join Lorraine Music Academy® and we will short circuit the process of being a part of a band. We will help you find the MAGIC IN YOU. With our help you will live in the magic of the music you perform. Whether you are a star or not, you will be able to do it. THAT IS SUCCESS!!!

Contact us and we will surely help you. We conduct our Music lessons online. Learning music at Lorraine Music Academy® is great fun. Here, learning music enables you to learn the foundations of music in the proper way. Thus learning music with us enables you to perform confidently in front of people. You can perform at home, at parties, at public gatherings, events and concerts.