“COME INDIA SING A CHRISTMAS CAROL” – A Musical Evening Celebrating Christmas: Conduent presented “A Musical Evening Celebrating Christmas”, a concert conceptualised and implemented by the Lorraine Music Academy in aid of LAMP Trust. The spirit of Christmas filled the air on 16th December at the Kingdom of Dreams. A house full Showshaa auditorium was glittering and vibrating with the yuletide spirit and song. It seemed like heaven’s angels came down to celebrate the birth of Jesus Christ ~ 2,000 years ago with people of Gurugram. It seemed like the angels were calling, “Come India Sing A Christmas Carol”!

There were a total of 100 students from Gurugram schools including Lorraine Music Academy, Pathways World School and Jyestha School. Children aged 4 to 18 years sang carols dating from the 16th Century in both traditional and modern styles.

We were privileged to have Shri John Samuel, IAS, who retired as the Post Master General of India and Member, Postal Services Board, Ministry of Communications & Information Technology, Government of India. John Samuel was credited with the initiative of conceptualising and implementing Speed Post in our nation. John’s speech about his ongoing journey to serve the nation of India as a retired IAS officer was touching and inspiring.

We were also honoured with the presence of Air Marshal Anil Chopra who was a Special Guest at our event. He blessed us with his encouraging words about our “Project India Dreams 2047” and his story of how he pursued his dream to learn the Saxophone later in his life. His motivation, positivity and encouragement was so special that we would love to record his musical journey and narrate it to every child, youth and adult who contacts us to learn music.

Mike Manlun opened the evening with the instrumental solo performance of “Joy To The World” on the Guitar and the audience loved it. Mike Manlun is a highly talented professional guitarist and teacher. He composes, improvises, performs and puts together music.

The next song set the mood for the evening with 50 students of Lorraine Music Academy singing “We Wish You A Merry Christmas” in A Capella style. The next carol was “Carol of the Bells”, sung by young children from the Lorraine Music Academy in four different voices – soprano, alto, tenor & bass – and two beat boxers.

The Lorraine Music Academy band took over with Carols in Rock and Pop style. They played “O Holy Night”, “Jingle Bell Rock”, “Carol of the Bells” and “Rudolph The Red Nosed Reindeer”.

The Christmas story was told in song with the Pop song “Hallelujah” (Christmas version). This was sung by Anika Bhatnagar and Naisha Mohanty accompanied by the band.

The famous Christmas Carol “Twelve Days of Christmas” was rendered with much gusto and style by the students of Lorraine Music Academy. There was a special dance performance by students of Jyestha, who danced to the music of “The Merry Christmas Polka”. These children study at the school run on the roadside and have never seen an auditorium before this. It was a truly a great exposure and an inspiring time for them.

The audience participated wholeheartedly during the event. Santa Claus moved around the auditorium, encouraging children to come, sing and play Christmas Carols. Santa Claus also gave away many gifts, sweets and prizes to the children.

The grand finale of the event was a sing-along carol session led by Lorraine Fiona Aloysius and the audience belting out Christmas carols with joy. Many Christmas prizes were given out to the people in the audience who came on to the stage to sing boldly. These prizes were courtesy “Anthea”. The concert was gifted to the community by “Conduent”. It was truly a Musical Christmas Celebration brimming with true community spirit of sharing and giving.

By singing Christmas Carols we wish to spread the message of love, joy, peace and community living across India. The whole spirit of Christmas is that of coming together, sharing, caring, giving, loving and forgiving. We believe music is the best way to express this spirit afresh among the participants, performers and audience. 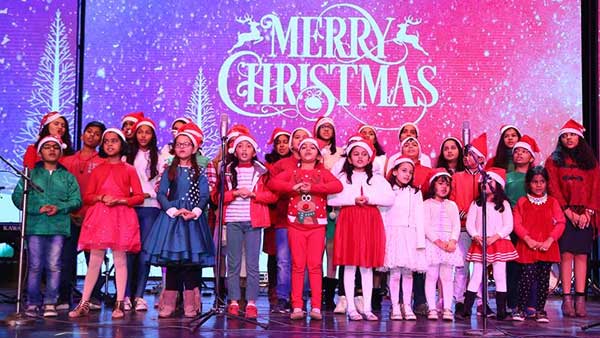 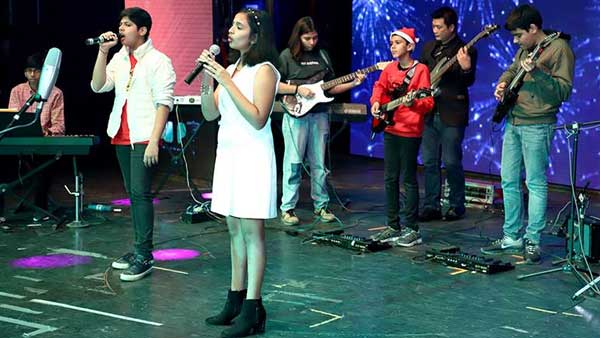 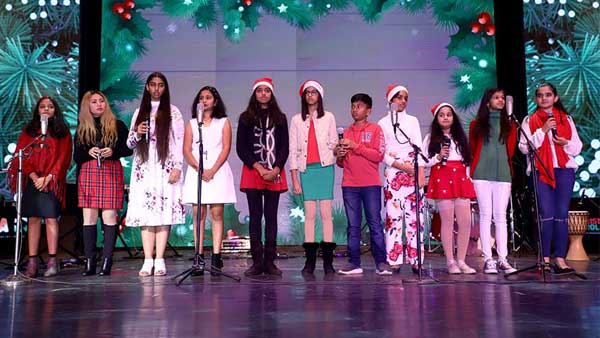 This concert is an integral part of the ongoing Nation Building Project “Come India Sing Jana Gana Mana” that was launched on 15th August 2013, our Independence Day.

For Donation Passes to our events, please:
email: info@lorrainemusicacademy.com
or sms 9910143344