Lorraine Music Academy and LAMP Trust will host A MUSICAL CELEBRATION OF CHRISTMAS – “COME INDIA SING A CHRISTMAS CAROL”, on the eve of Christmas on Thursday 21st December 2017 @ 7:00 pm at Kingdom of Dreams, Sector-29, Gurugram.

Conduent presented “A Musical Evening Celebrating Christmas”, a concert conceptualised & implemented by the Lorraine Music Academy in aid of LAMP Trust. The spirit of Christmas filled the air on 21st December 2018 at the Kingdom of Dreams. A house full Showshaa auditorium was glittering and vibrating with the yuletide spirit and song. It seemed like heaven’s angels came down to celebrate the birth of Jesus Christ ~ 2,000 years ago with people of Gurugram. It seemed like the angels were calling, “Come India Sing A Christmas Carol”! There were a total of 120 students from Gurugram schools including Lorraine Music Academy, Shalom Presidency School, Scottish High International School and Excelsior American School.

Children aged 4 to 18 years sang carols dating from the 16th Century in both traditional and modern styles. The first song set the mood for the evening with 50 students of Lorraine Music Academy singing “We Wish You A Merry Christmas” in a Capella style. The next carol, the joyful strains of a 16th century Welsh carol “Deck the Halls with Boughs of Holley”, was sung in traditional style. This was followed by the carol “Rocking Around The Christmas Tree”. The Lorraine Music Academy Band then took over with carols in modern Pop and Rock style. They performed modern arrangements of “Carol of the Bells”, “Jingle Bell Rock”, “Rudolph the Red Nosed Reindeer” and “O Holy Night”. The soprano singing of Sabina Dsouza aged 15 years was truly a one of its kind hair rising experience. Her rendition of “Silent Night” in high soprano style was outstanding. Ayushi Bhanja, 15 years, sang “Have Yourself a Merry Christmas” with passion and emotion with her beautiful melodious voice. Nadia D’Souza from Bengaluru performed “It’s The Most Wonderful Time of the Year” and “The Latte Boy”. Students of Shalom Presidency School sang angelically the carols “Angels We Have Heard On High” and “Hark The Herald Angels Sing” followed by a great arrangement of “Mary did you know” by Excelsior American School. Students of Scottish High International School sang a modern Christmas carol “The Mistletoe”. “The 1,000 Hands” dance performance by the Excelsior American School communicated the spirit of giving at Christmas time.

Jesus was born in humble circumstances. Christmas is a time when we remember the poor. Aubrey Aloysius, founder of LAMP Trust, reminded the audience of the necessity to include the poor and the deprived in the process of development and building of our nation. He spoke of the story of a poor boy born in 1904 who struggled against all odds to overcome many challenges in his life and finally became the 2nd Prime Minister of our nation. There was a preview screening of the short film “A Hero Of War & Peace – An Author’s Journey” made by Aubrey Aloysius on the life of Bharat Ratna Lal Bahadur Shastri. This short film will be submitted in various International Film Festivals across the world in 2018. Aubrey Aloysius has spent over 4 years in researching the life and character formation of Lal Bahadur Shastri.

Based on his extensive research Aubrey is writing a book and making a feature length film to tell an untold story about the unsung hero who made a significant mark as a responsible citizen in nation building. At the event, Sunil Shastri encouragingly said, “Aubrey, you need not worry, the people are behind you, we all are with you, and we are sure that you will be able to succeed in your mission.” He also encouraged the audience to take a pledge to let every family in India have one Lal Bahadur Shastri in their family to take India forward at a very fast pace towards development. Neera Shastri expressed her confidence that with the amount of dedicated research work that Aubrey has put into the film project, the film is sure to touch the hearts of every citizen of India and encourage them to commit themselves in the service of the nation’s development. Lorraine Fiona Aloysius, Director of Lorraine Music Academy, said “By singing Christmas Carols we wish to spread the message of love, joy, peace and community living across India. The whole spirit of Christmas is that of coming together, sharing, caring, giving, loving and forgiving.

We believe music is the best way to express this spirit afresh among the participants, performers or audience”. The grand finale of the event was a sing-along carol session led by Lorraine Fiona Aloysius and the audience belting out Christmas carols with joy. Many Christmas prizes were given out to the people in the audience who came on to the stage to sing boldly. These prizes were courtesy the newly launched Women’s clothing brand “Anthe”. The concert was gifted to the community by “Conduent”. It was truly a Musical Christmas Celebration brimming with true community spirit of sharing and giving. This concert is an integral part of the ongoing National Building Project “Come India Sing Jana Gana Mana” that was launched on 15th August 2013, our Independence Day. 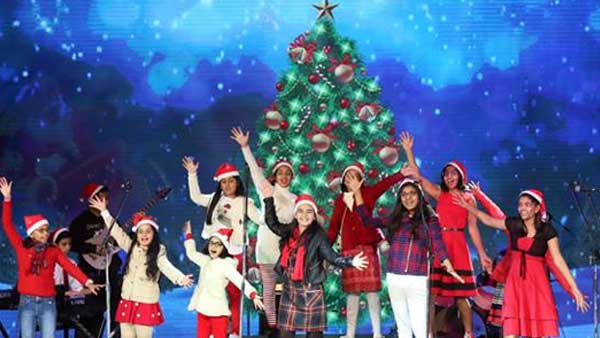 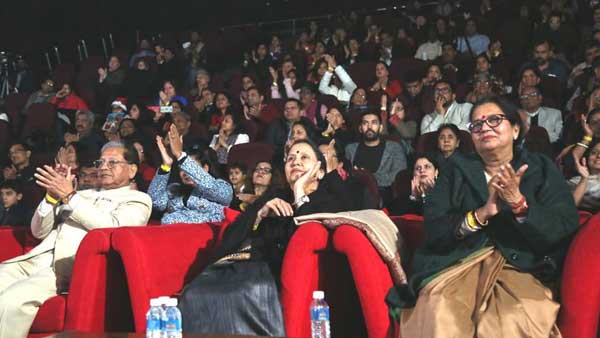 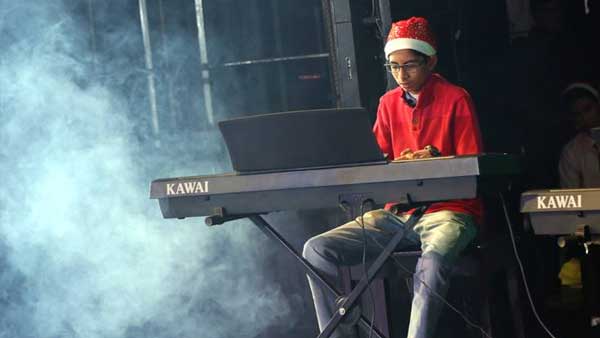 For Donation Passes to the event, please:
email: info@lorrainemusicacademy.com
or sms 9910143344

This event forms a part of the ongoing National Patriotic Project “Come India Sing Jana Gana Mana” that was launched on 15th August 2013, our Independence Day, inaugurated by the then Union Cabinet Minister and current Member of Parliament (Rajya Sabha) Shri Oscar Fernandes.