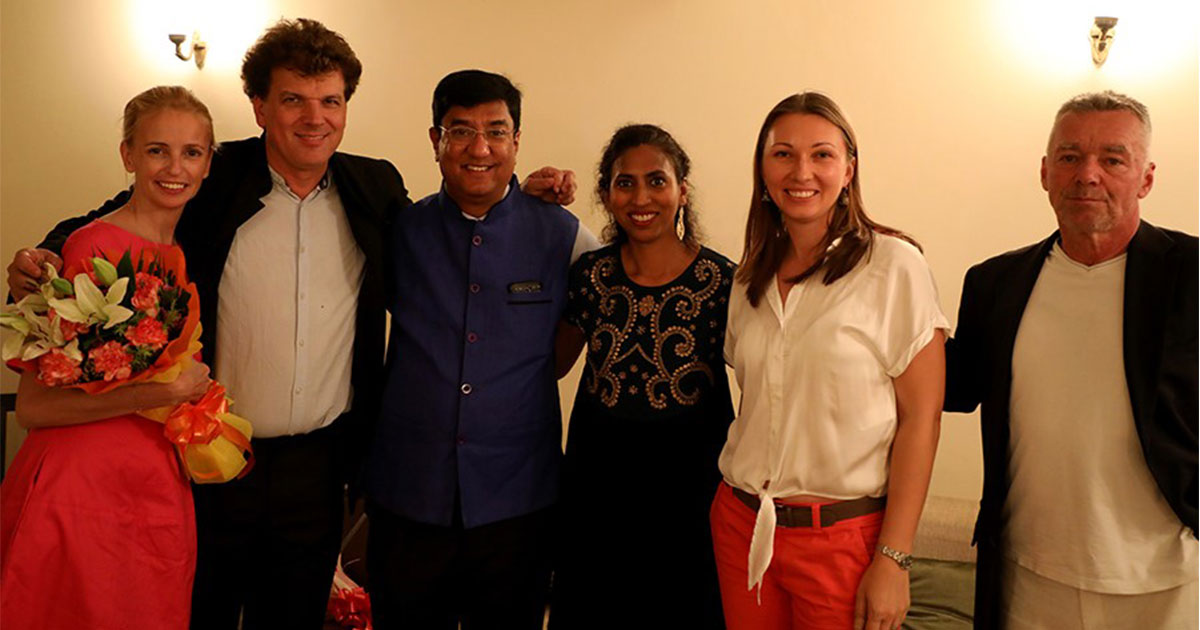 Lorraine Music Academy and LAMP Trust had the honour and privilege of hosting Matthias Fletzberger, world renowned Pianist and Conductor from Vienna, Austria on 23rd and 24th April 2019 at the residence of Aubrey Aloysius & Lorraine Fiona Aloysius. This House Concert was in collaboration with the Austrian Embassy, New Delhi and the Austrian Cultural Forum.

It was truly a magical evening. We had the best artists – both professional and student artistes – performing before a small group of 100 people, both children and adults.

World renowned Pianist and Conductor, Matthias Fletzberger, has played in concert with the best violinists in the world.

It was breath-taking to see young extra-ordinary artistes Anthea Mascarenhas Dias and Cayla Rodrigues perform so professionally and artistically a repertoire that included Preludium and Allegro by Fritz Kreisler, Violin Concerto No 5 by Friedrich Seitz and Zigeunerweisen by Pablo de Sarasate among many others. Cayla stunned the audience when she was on a waveboard / roller scates while she played Humoresque by Antonin Dvorak and Perfect by Ed Sheeran.

45 children aged 4 to 16 years of age made the evening magical by sitting in pin drop silence for 90 minutes at a stretch and listening to the maestros.

Students of the Lorraine Music Academy enchanted the audience by singing Doh A Deer and So Long Farewell. It was truly the “Sound of Music” that the audience was reliving. 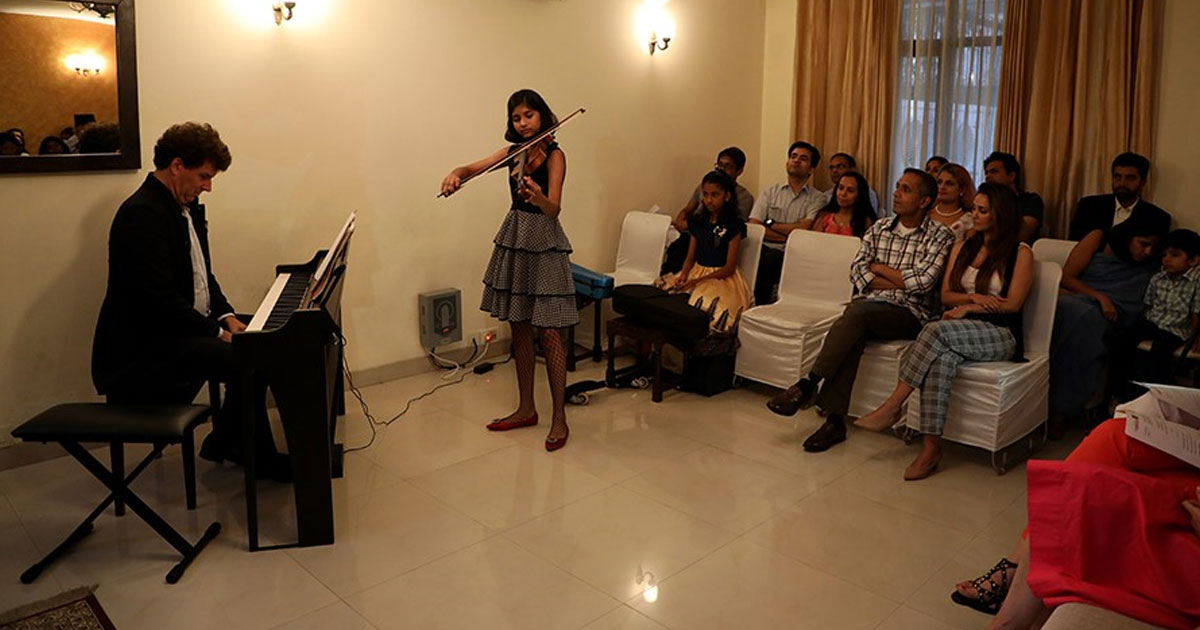 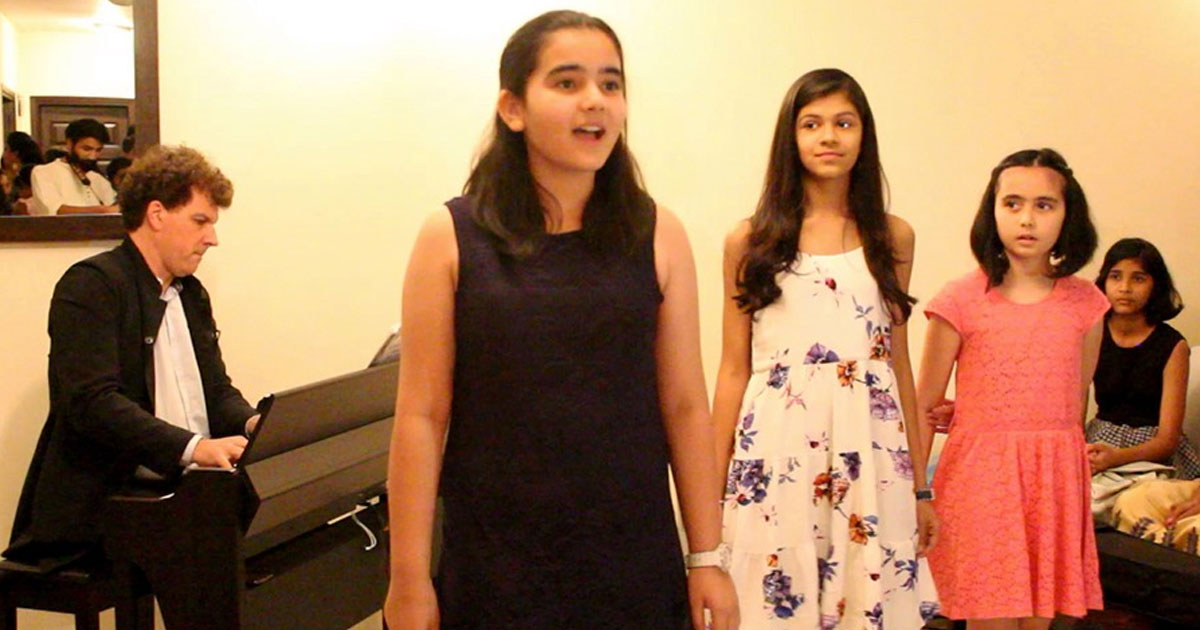 Born in Vienna, Matthias Fletzberger was accepted at the age of 5 as a student of the University of Music and Performing Arts, Vienna. Aged 12, he won the first prize at the Austrian Youth Competition “Jugend Musiziert” and was accepted to the concert class of Hans Graf, where he obtained his diploma with special distinction. Further teachers include Bruno Seidlhofer, Tatiana Nikolayeva, Jacques Rouvier, Nicole Henriot-Schweitzer and Leon Fleisher. While still a student, Fletzberger won prizes at international piano competitions, including the Busoni, Rubinstein, and Bösendorfer competitions.

By recommendation of Rolf Liebermann and Elisabeth Schwarzkopf, Fletzberger started a second career as an opera conductor. He worked as repetiteur in Salzburg and at the Prague State Opera, as Musical Director of Opera Productions at the Vienna Festival, and as Kapellmeister at Theater St. Gallen. Following several years as General Manager of the Sofiensale – Vienna’s oldest and largest venue for cultural events – where he presented a broadly varied programme of opera, musical and theatre presentations as well as galas, incentives, parties and clubbing events, he decided to return to the classical music scene.

Since 2008 Fletzberger performs again both as a conductor and as a pianist (as soloist, Lied accompanist, and chamber music pianist). In 2011 Deutsche Grammophon released the CD/DVD album Violin in Motion featuring arrangements by Lidia Baich and Matthias Fletzberger of well-known ballets. His North American debut as a conductor was in January 2013 within the “Salute to Vienna” concert series in Montreal and Quebec.

In the years 2017 and 2018 he developed the project “Fascination Wagner” together with stage and film producer Selcuk Cara for the Austrian Tenor Andreas Schager; the world premiere was staged in Prague in cooperation with the Narodni divadlo Praha in October 2018. From 2018 to 2020 he is the Conductor of the first South-Korean production of Wagner’s “Ring-Cycle” in Seoul Arts Centre, staged by Achim Freyer.

Lorraine Fiona Aloysius is a Licentiate of the Trinity College of London – UK (Pianoforte). She is also a Masters in Banking & Finance. In 2012, iCONGO – International Confederation Of Non Government Organisations awarded Lorraine the coveted “KARMAVEER PURASKAAR”.  She received this award because of her visionary contribution and work in the field of Music, Art & Culture. Lorraine also received the “SNP NATION ACHIEVER AWARD” (2015). She received this award on account of serving society through the Nation Building Project “Come India Sing Jana Gana Mana”. Lorraine is the Founder Director of Lorraine Music Academy. She is also the Founder Trustee of LAMP Trust.

Lorraine Aloysius first started playing the piano from the age of 8. Her mother Helen D’Cruz always greatly encouraged & inspired Lorraine Aloysius in her pursuit of music. Therefore, she now has a great passion for music and the performing arts. By all means, she has experience in teaching, creative thinking, public relations, training and motivating large teams across the country.

Further, Lorraine Aloysius has sent over 2,000 students for the exams conducted by world renowned globally accredited organisations. These include Trinity Guildhall / Trinity College London, Associated Board of the Royal Schools of Music, U.K., and RockSchool, U.K. Even more, Lorraine also oversees a regular visiting faculty that comes in from across the globe. These include some of the top global Colleges of Music & Drama. Thus she handles special training programs for students of Lorraine Music Academy during various periods of the year.

Anthea Luna-Marie Mascarenhas Dias, 13 years, is a class 7 student of Fatima Convent High School, Margao-Goa. She is the youngest Goan to be awarded the ATCL diploma in violin with a distinction, at the age of 11yrs by Trinity College of Music -London in December 2017.

She started learning violin at the age of 6yrs with Prof Winston Collaço – a US and Singapore trained Suzuki Method violin teacher based in Goa. At age of 9, she completed her Advanced Certificate Gr 8 level with distinction. She was placed first in Violin at the State level Talent Search competition 2016-17, organised by Directorate of Art and Culture, Government of Goa.

At a young age she has given numerous prodigious solo performances across Goa to much critical acclaim in the local press and TV who have titled her as “A Star is Born”, “Prodigy” etc. On April 7th, 2019 she was the youngest performer speaker at the prestigious TEDxICT in Mumbai. She performed virtuoso repertoire to a standing ovation. She has undergone intensive training at master classes under visiting foreign artists and also under teachers of International repute at Singapore.

Cayla is 11 years old and is a 6th standard student at Sharada Mandir School, Goa. She enjoys scuba diving, reading mystery, adventure stories and anything by JK Rowling, skating and performing.

Cayla has been studying the violin from the age of 4 years under her teacher, guide and mentor Prof. Winston Collaco, a US trained Suzuki method teacher. Cayla regularly attends masterclasses held by International violinists. In October 2018, Cayla trained under Mumbai-based Japanese violinist Mika Nishimura. Annually, Cayla attends masterclasses held by Sanya Cotta (Germany) and Joris Decolvenaer (Belgium). She has also attended workshops. In 2018 she represented India at the Asia Region International Suzuki conference in Manila, Philippines and attended the International Suzuki Conference in Pune in 2016.

Cayla was selected from amongst 24 musicians to perform 3 pieces, at the young talent concert, Da Capo Sammelan held by Soprano Patricia Rozario and Pianist Mark Troop. Cayla, the youngest member of the Escola Amadeus String Ensemble (E.A.S.E), played in first violin, the Bach Concerto in A minor. She also regularly participates in orchestras held by Childs Play (India) Foundation in Goa at their Christmas and Monsoon concerts. Cayla won the second place in the Goa State Level Cultural Talent Search competition 2018-19, organised by Directorate of Art and Culture, Goa, for students from 10 to 15 years. 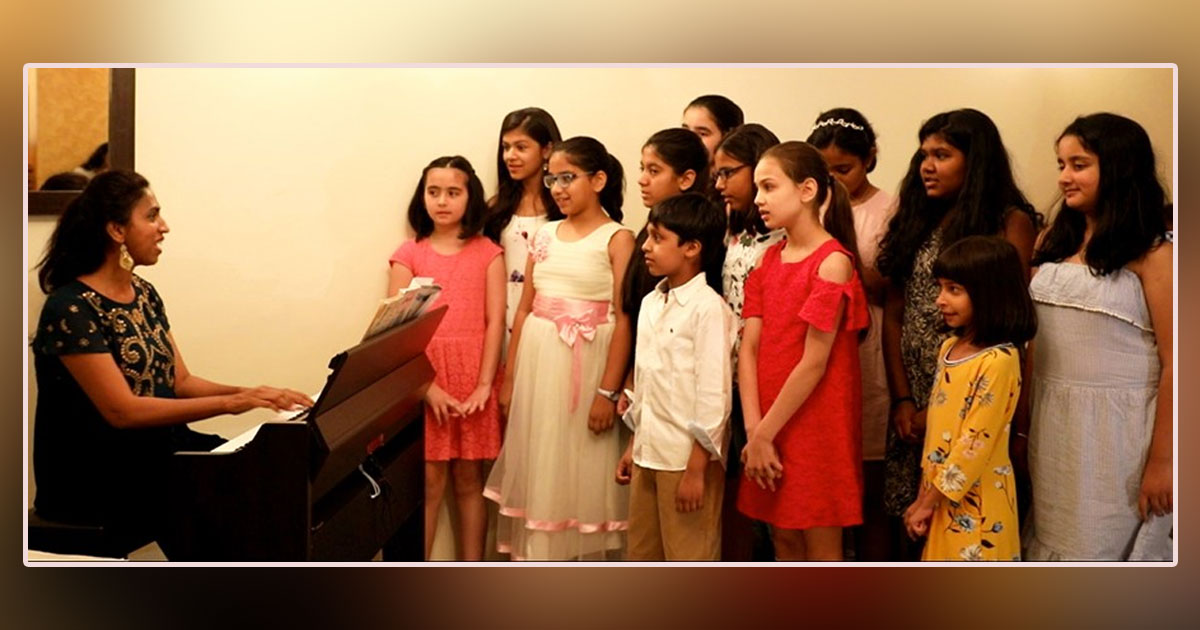