Christmas season is here and Lorraine Music Academy is celebrating the joy of Christmas through music. On 21st December 2019 @ 7pm the hall was filled with 40+ excited children and 90+ adults.

The Christmas spirit and music united all age groups from age 4 years to age 83 years. Over 50 participants sang and played musical instruments for the audience. The audience also participated in Sing-Along right through the evening.

The evening began with Anika Bhatnagar singing “It Is Beginning To Look A Lot Like Christmas”. This was followed by other beautiful songs by the Lorraine Music Academy Choir. “Carol Of The Bells” was sung in A Capella style, followed by a German Christmas Carol “Snowflakes Fall Softly Down” sung in both German and English. We had a mini trio of Rian, Nia and Samaira singing “We Three Kings Of Orient Are”. One of the most loved Christmas Carols “O Come All ye Faithful” was sung in harmony accompanied by the sound of the traditional church organ played by Lorraine. John Lennon’s Christmas composition “So This Is Christmas – The War Is Over” moved the hearts of the performers and the audience.

The Christmas Carol Challenge was one of the highlights of the evening. Every child in the room was excited to play a line or two of a Christmas Carol on the Piano. So many Carols were represented here. “Rudolph The Red Nosed Reindeer” by Viraj and Samaira, “Jingle Bells” Nia and Veer, “Deck The Halls” by Avyukt and Rian”, “Frosty The Snowman” by Surabhi, “Jingle Bell Rock” by Kritika, “Silent Night” by Zivanka, “We Wish You A Merry Christmas” by Raya, Shashwat Joglekar played “Jingle Bells” in a minor key. Agastya sang “Pearly Shells On The Ocean” accompanied by Zev on the Drums to remind people to love each other right through the year, and not only at Christmas time.

Santa Claus rushed in to reward all the children’s lovely performances with sweets and gifts. The whole audience joined in singing “Jingle Bells” with great gusto.

The Grand Finale of the Christmas Party evening was the Lorraine Music Academy Band that performed beautiful arrangements of Carols with great style, passion and confidence. “The Drummer Boy” was performed by three Drummers on the Drums and the Jembe. “Rocking Around The Christmas Tree”, “Feliz Navidad” and “The Christmas Canon” were among the performances.

The evening ended with the soft singing of “Silent Night” by the Choir and the audience.

Rishan Bhatnagar, aged 14 years, conducted the Choir with great passion and maturity. We are excited to have Rishan back with us. He has just returned from Vienna a few months ago after a 5-year long program with “The Vienna Boys Choir”. Rishan has been the very first Indian to be a part of this prestigious and world famous Choir that has been in existence for over 500+ years. Rishan co-hosted the evening with Lorraine, sang two solos in German and motivated the audience to sing along right through the evening.

We wish you all a Happy Christmas and a Blessed New Year! 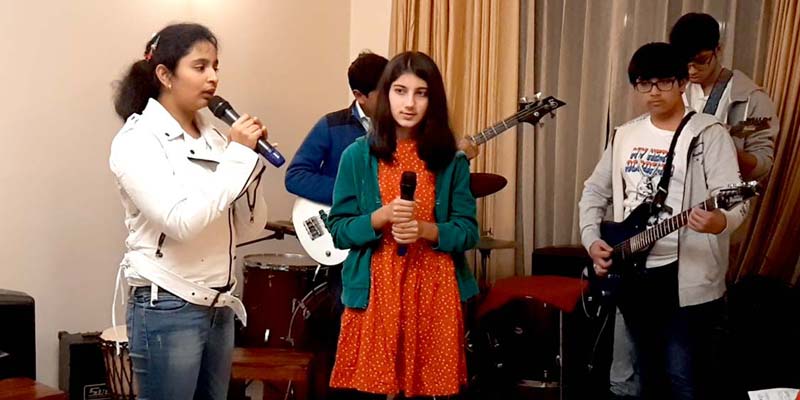 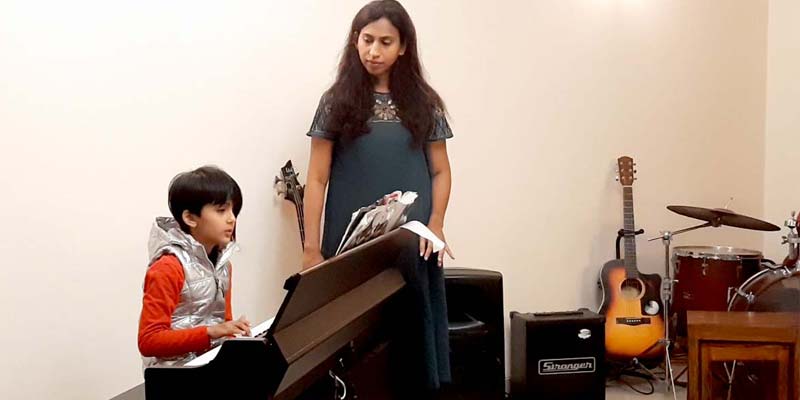 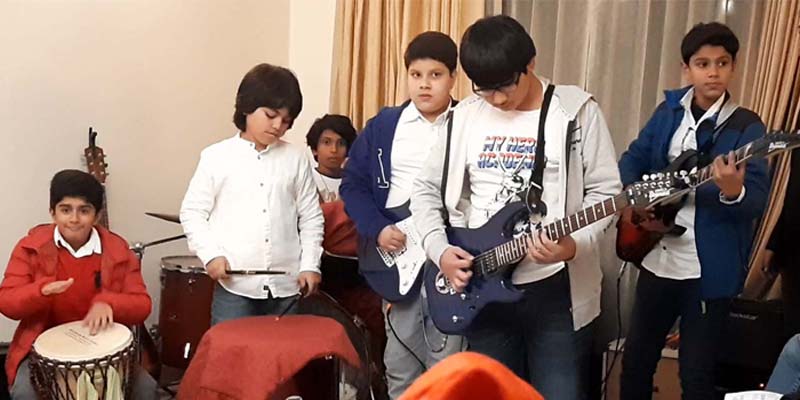 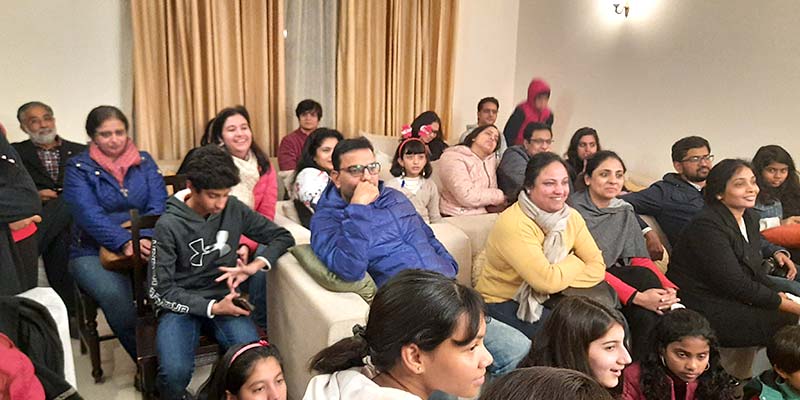 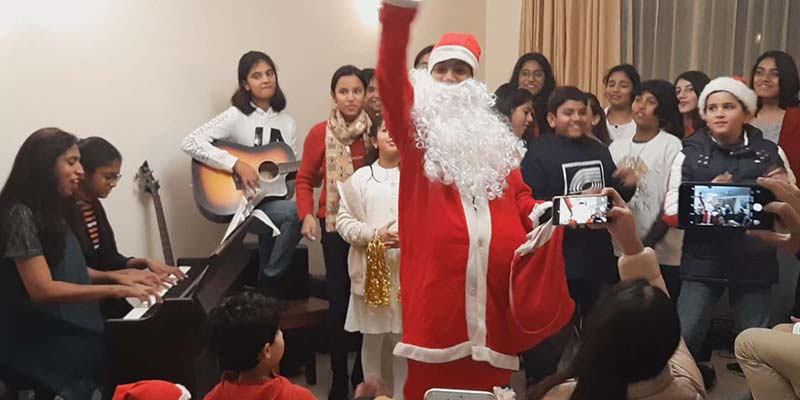 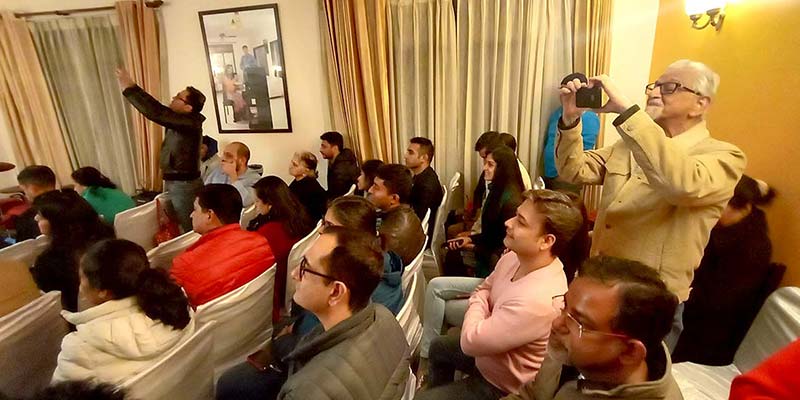 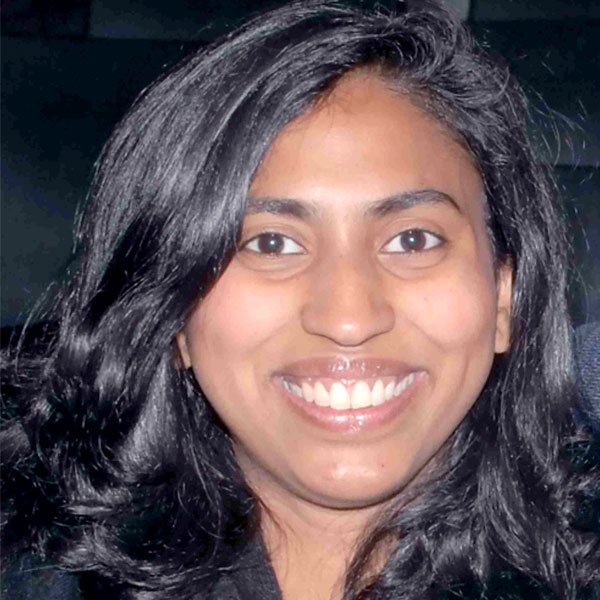 Lorraine Fiona Aloysius is a Licentiate of the Trinity College of London – UK (Pianoforte). She is also a Masters in Banking & Finance. In 2012, iCONGO – International Confederation Of Non Government Organisations awarded Lorraine the coveted “KARMAVEER PURASKAAR”.  She received this award because of her visionary contribution and work in the field of Music, Art & Culture. Lorraine also received the “SNP NATION ACHIEVER AWARD” (2015). She received this award on account of serving society through the Nation Building Project “Come India Sing Jana Gana Mana”. Lorraine is the Founder Director of Lorraine Music Academy. She is also the Founder Trustee of LAMP Trust.

Lorraine Aloysius first started playing the piano from the age of 8. Her mother Helen D’Cruz always greatly encouraged & inspired Lorraine Aloysius in her pursuit of music. Therefore, she now has a great passion for music and the performing arts. By all means, she has experience in teaching, creative thinking, public relations, training and motivating large teams across the country.

Further, Lorraine Aloysius has sent over 2,000 students for the exams conducted by world renowned globally accredited organisations. These include Trinity Guildhall / Trinity College London, Associated Board of the Royal Schools of Music, U.K., and RockSchool, U.K. Even more, Lorraine also oversees a regular visiting faculty that comes in from across the globe. These include some of the top global Colleges of Music & Drama. Thus she handles special training programs for students of Lorraine Music Academy during various periods of the year.