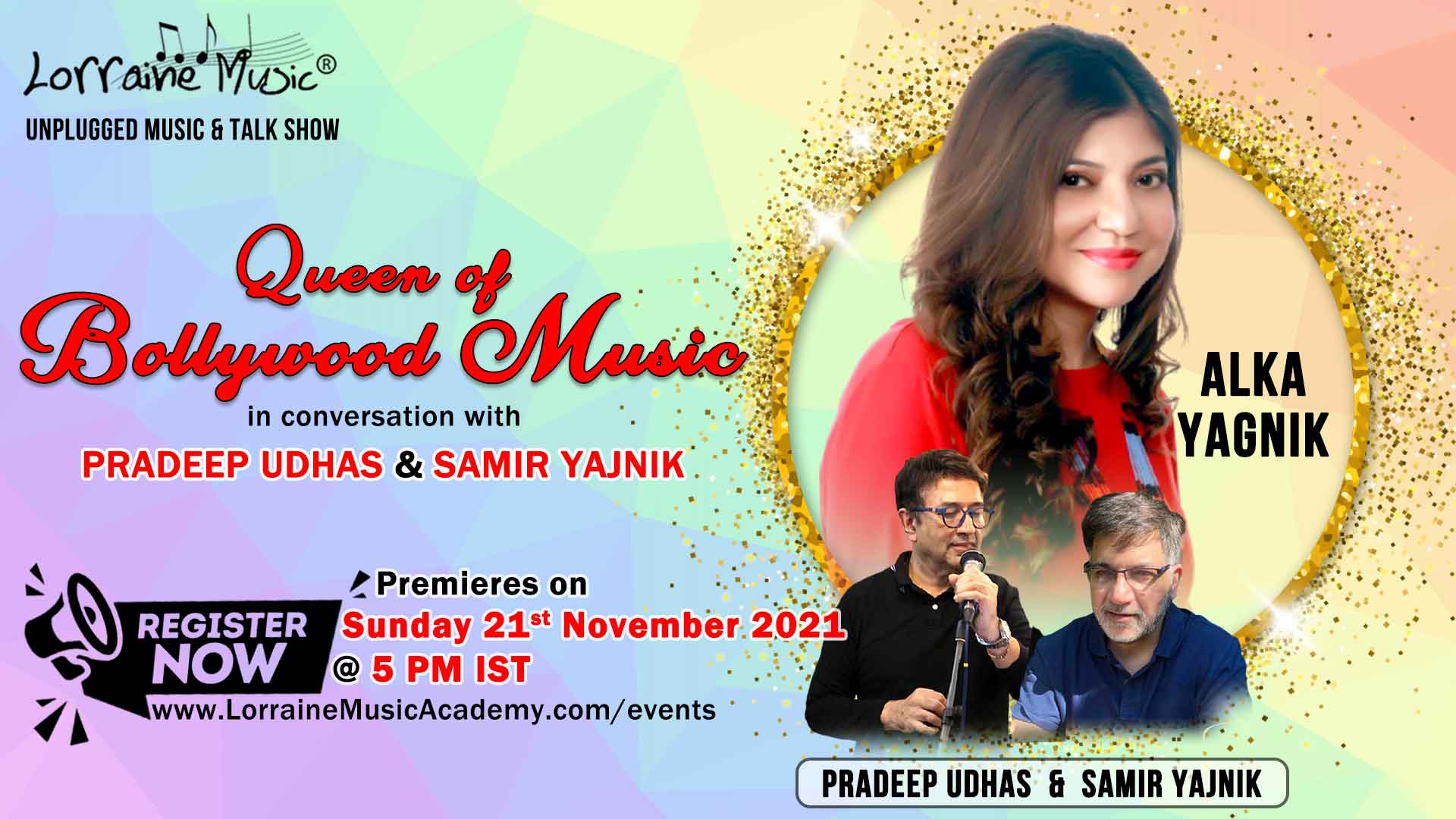 ALKA YAGNIK is an Indian Bollywood Playback Singer. She is noted in Indian cinema for a career spanning over four decades and for singing in 25+ languages. She is a record seven-time winner from a record of 36 nominations of the Filmfare Award for Best Female Playback Singer, a two-time recipient of the National Film Award, and several other music awards and honors listed below. Further, as many as twenty of her tracks feature in BBC’s “Top 40 Bollywood Soundtracks of all time” review. She is one of the most prolific female playback singers and has sung a large number of female solos in her Bollywood career. She is ranked No. 1 in YouTube’s Music Charts & Insights list of top global artists as of 25 March 2021. She has been on the chart for 236 weeks with 400 million views, and she has sung in more than 25 languages.

ALKA YAGNIK was born in Kolkata to a Gujarati family. Her father’s name is Dharmendra Shankar. Her mother Shubha was a singer of Indian classical music. In 1972 at age six, she started singing for Akashvani (All India Radio), Kolkata. At age 10, her mother brought her to Mumbai as a child singer. She was advised to wait until her voice matured, but her mother remained determined. On a subsequent visit, ALKA YAGNIK got a letter of introduction to Raj Kapoor from his Kolkata distributor. Kapoor heard the girl and sent her with a letter to noted music director Laxmikant. Impressed, Laxmikant gave her two alternatives – an immediate start as a dubbing artist or a later break as a singer; Shubha chose the latter for her daughter.

A classically trained ALKA YAGNIK began singing bhajans for Akashvani (All India Radio), Kolkata at the age of six. Her first song was for the film Payal Ki Jhankaar in (1980). This was followed by Laawaris (1981) with the song “Mere Angane Mein”, followed by the film Hamari Bahu Alka (1982). She got her big break with the song “Ek Do Teen” from Tezaab (1988). She has said that she had a high fever on the day she recorded “Ek Do Teen.” The song won her the first out of seven Filmfare Awards for Best Female Playback Singer. Besides Hindi, she has sung in more than twenty-five languages, besides singing 15 Pakistani songs, including Assamese, Bengali, Gujarati, Malayalam, Marathi, Manipuri, Odia, Punjabi, Bhojpuri, Tamil, and Telugu. She has also performed in live concerts around the world. In an interview with Mid-Day, ALKA YAGNIK said that she recorded five songs daily during her time.

In 1993, ALKA YAGNIK sang a seductive song “Choli Ke Peeche Kya Hai” with Ila Arun. The song created controversy because of the lyrics written by Anand Bakshi. She got a second Filmfare award for the song, which she shared with Ila Arun.

In 1994, she sang another seductive song, “Din Mein Leti Hai,” from the film Amanaat with co-singer Kumar Sanu and Ila Arun, composed by Bappi Lahiri and lyrics by Anwar Sagar. Besides the duet version, she also sang the female version of the song with Ila Arun. She has performed several shows with Kalyanji-Anandji and Laxmikant-Pyarelal.

Throughout the 90s, ALKA YAGNIK along with Kavita Krishnamurthy and Poornima were singing most of the songs for heroines.

ALKA YAGNIK has also been involved in various projects to empower girls. In 2014, she again teamed up with Sonu Nigam to sing the song “Phool Khil Jayenge” for child health awareness. She also sang a song titled “Maine Li Jo Angdai” for the album Women’s Day Special: Spreading Melodies Everywhere. It was composed by Farid Sabri, Harish Chauhan, and Gurudatt Sahil; and penned by Sudhakar Sharma.

ALKA YAGNIK shares the title for the greatest number of Filmfare Awards with Asha Bhosle (seven) by a female playback singer. She has sung over 2,400 Hindi songs in 1,000 films. She is the fifth most prolific Bollywood singer of all time after Asha Bhosle (7,886 songs), Mohammed Rafi (7,405 songs), Lata Mangeshkar (5,596 songs), and Kishore Kumar (2,707 songs). She is the third topmost female playback singer after Lata Mangeshkar and Asha Bhosle, who has sung the maximum number of female solos in her Bollywood career.

ALKA YAGNIK credits her mother as her first guru, who began singing at the age of four. Besides her mother, ALKA YAGNIK learned singing from Kalyanji-Anandji and Laxmikant–Pyarelal. Although she has sung many songs, according to ALKA YAGNIK, her voice suits the romantic genre best. She has sung romantic, sad, peppy, seductive, and item number songs. ALKA YAGNIK has acknowledged veteran singer Lata Mangeshkar as her inspiration. Most of her duets were with Kumar Sanu, followed by Udit Narayan and Sonu Nigam. She sang a maximum number of romantic songs with Kumar Sanu and flamboyant numbers of songs with Udit Narayan. She is known, with Kumar Sanu and Udit Narayan as the trinity of 1990s playback singing.

ALKA YAGNIK stated that singers are also actors. She mentioned that when she sings a song, the actor comes through in her voice.

PRADEEP UDHAS is a Senior Partner, advising Chairman on firm matters as well as leading largest and most strategic national and global accounts. He is focused on enhancing KPMG in India’s market presence and client engagement. He is a global business executive leader with more than 30 years of industry experience. His extensive background in global business, management consulting, technology, private equity and quality systems makes him uniquely qualified to serve clients pursuing innovative global strategies.

Currently he is a member of the National Board of IACC (Indo-American Chamber of Commerce). He is also a member of Founder’s Circle of Avasara Leadership Academy, is an Advisory Board Member of Lorraine Music Academy and is on the Global Board of TiE (The Indus Entrepreneurs).

Earlier, he has served on the executive council of NASSCOM, an Indian IT industry think-tank and on the advisory board of St. Xavier’s college, Mumbai.
PRADEEP UDHAS has been a playback singer, BOLLYWOOD music director for film “Hote Hote Pyar Ho Gaya” and has given live musical performances to the audiences around the world. Currently he is working on his album “Rubaru”.

SAMIR YAJNIK is an Executive Director of Electrodrive Powertrain Solutions (Electra EV), a company owned and promoted by Mr. Ratan Tata in his personal capacity. Prior to this he has been President and COO of Tata Technologies for 22 years a company he has nurtured and grown worldwide since he sold his engineering start-up in 1995 in Singapore.

SAMIR YAJNIK is passionate about the Electrification charter of the country and has pioneered efforts to establish the first independently designed and manufactured powertrain in India.

A Mechanical Engineer fom IIT Bombay and with an MS from University of Mississippi, With stints in UK/Europe, Singapore, China, US and now back in India, Samir’s forte is to integrate and work with people from diverse and world cultures whether it’s in the world of engineering or in fact in music. He has chaired Nasscom’s ER&D council for 3 years and for the last 12 years as a member of the council, serving as a senior adviser in many state EV committees.

SAMIR YAJNIK’s musical journey dates back to the informal training he got while playing percussion instruments and accompanying his sister ALKA YAGNIK in her various concerts in India, UK, and the US with the Kalyanji Anandji musical tours. As a vocalist, he sang with his sister ALKA YAGNIK when they did their private album for TIPS Music in 2001 called “Dil Le Gaya Ajnabi” which was a hit in the Indian and UK charts. Samir has been pursuing vocal music as a hobby but has a deep understanding and love for various forms of Hindustani and Western music.