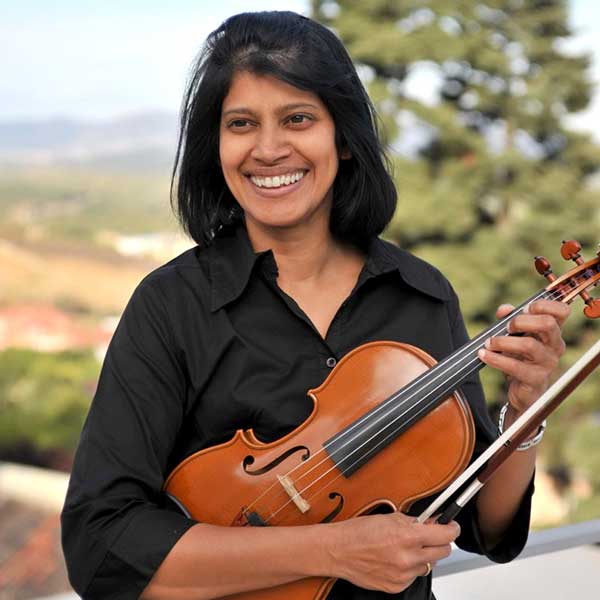 Deborah Gonsalves is co-founder of Orphelion who performs in different configurations, such as piano-trio and string-quartet, having covered an extensive repertoire of works and styles. With Orphelion, she participated in numerous premieres of works written for the ensemble itself, recordings and radio broadcasts.

She is currently a member of the Galician Symphony Orchestra, as well as being very involved in teaching. As a pedagogy, Deborah Gonsalves has collaborated with several festivals in Spain and India. Her students have been awarded in national and international competitions and many of them are now either part of Spanish and European orchestras, 0r members of chamber music groups such as the Quiroga Quartet and Vera Quartet. Apart from maintaining her violin class, she regularly teaches the Youth Orchestra of the Galician Symphony Orchestra and the National Youth Orchestra of Spain (JONDE). Since 2020 she has been appointed resident professor of violin at the Centro Superior de Música in Valga, Galicia (CSM).

She was born in India, where she began her musical studies with Josic Menzies and Melbourne Halloween. She has been prize winner of several music competitions held nationwide and in Mumbai.

Deborah Gonsalves studied at the University of Musik und Dartsellende Kunst in Vienna with Eduard Melkus and Klaus Maetzl (Alban Berg Quartet) where she received the title of “Masters in Performance”. During her studies she was awarded a scholarship from the Austrian Ministry of Education.

She has been a member of the Youth Orchestra of the European Community (ECYO) with which she participated in a concert tour to Spain, Italy, England and India under the baton of Zubin Mehta.

Deborah Gonsalves has collaborated with orchestras in Austria and Denmark. She has performed as a soloist, and with several chamber music groups in Austria, Germany, Switzerland, Denmark, England, Japan, India, South America and Spain.