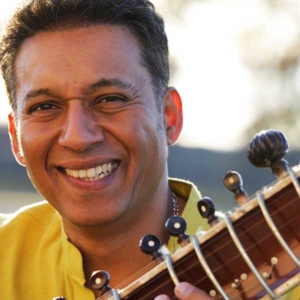 HIDAYAT HUSAIN KHAN
Born, 24th September, 1975 in Dehra Dun, India, Hidayat Husain Khan had his destiny etched in classical music. A direct descendant of the greatest of all lineages in Hindustani classical music, he is seventh in an unbroken line of generations of sitar players inheriting the legacies of legendary masters who arose from his family. His great grandfather, USTAD IMDAD KHAN co-developed the Surbahar (bass sitar). His grandfather USTAD ENAYAT KHAN was the foremost Sitar player of his time.

Hidayat Husain Khan’s baptism into music started at the tender age of four. Under the tutelage of his father and legendary sitarist USTAD VILAYAT KHAN (1928-2004), he excelled in “khayal” and other forms of vocal music and was soon seen in the centre stage when he gave his first public performance in Lucknow, India at the age of nine.

His formal initiation into sitar playing started from the age of fourteen. From his father he imbibed and mastered the art of “Gayaki Ang”, an innovative style of sitar playing, indebted to his own treasured lineage, in which the instrument strives to imitate the inflections of the human voice.

Embarking on his voyage as a talented satirist, Hidayat Husain Khan was soon performing solo or at tandem with his illustrious father. During this time, he performed at various concerts including the prestigious Royal Albert Hall in London, England, Kennedy Centre in Washington D.C., Carnegie Hall and Alice Tully Hall at the Lincoln Centre in New York.

Versatility marks the uniqueness of Himayat Husain Khan. Possessing a rare talent, he oscillates effortlessly from the classical “IMDADKHANI” gharana to the semi classical and fusion music. Contrasting styles, yet equivalent in poise, grace and finesse.

In a pioneering effort to bring varied musical styles together under a unique theme he created a cascade of new sounds adapted from Indian classical, hip-hop, Latin, Spanish, techno and electronica. Titled “Ziver” and released, November 7th, 2006, this trend setting album featured popular tracks such as Chhaap Tilak and Ali Maula rendered in a completely new form with distinct rhythmic and groovy sounds. Ziver received number 1 rating in the MTV and Billboards charts in India and all over the world. Himayat also received his first Grammy Nomination for this album.

Riding on the unhindered success of Ziver, Hidayat Husain Khan composed his next album “Sawariya” launched and released by Saregama India ltd, January 16th, 2010. True to his musical talent he reveled in every spectrum of the album, ranging from lyrics, music, and vocal rendition. Along with this Hidayat Husain Khan is also credited for over 15 Indian classical music albums.

His phenomenal flexibility earned him prestigious invitations from all over the world. This included The Miles From India concert, uniting renowned Indian musicians with established American jazzmen including famed Rolling Stones bassist Darryl Jones, on July 4th, 2009, in Théâtre Maisonneuve, Place des Arts, as part of the Grands concerts TD Canada Trust series.

Hailed as the ‘Young Master’ by the Rolling Stone magazine, Hidayat Husain Khan went onto perform with some of the biggest names of the musical world, including, Ndugu Chancler, Ronnie Woods, Alicia Keys, Usher, Zakir Hussain, Pete Townshend, Will.I.Am, Jay Z, and Nicholas Payton. He has performed all over the world including Europe, Japan, USA, Malaysia, Indonesia, Canada, and Singapore.

Media has been universally effusive in their praise for Hidayat Husain Khan’s presence and performance, be it The Daily Star, Chicago Tribune, The London Times, or The New York Times, The Washington Post, The Star Ledger, Times of India, among many others.

Hidayat Husain Khan’s passion to embrace all forms of music touched a further cord through his internationally acclaimed global fusion group “Sufi Music Ensemble”. A musical sojourn that encompasses mystical fusion and folk music, spell-binding jugalbandi and vocals with Sufi songs.
Hidayat Husain Khan has lent his brilliance on many film scores, including Mira Nair’s ‘Kama Sutra’ among many others. In 1999, he completed a background track for the Discovery Channel program on tigers titled “Tracking a Legend”.

A natural teacher, Hidayat Husain Khan pleasures in imparting his talent and skills to students, followers and lovers of classical music, a vocation he holds close to his heart.