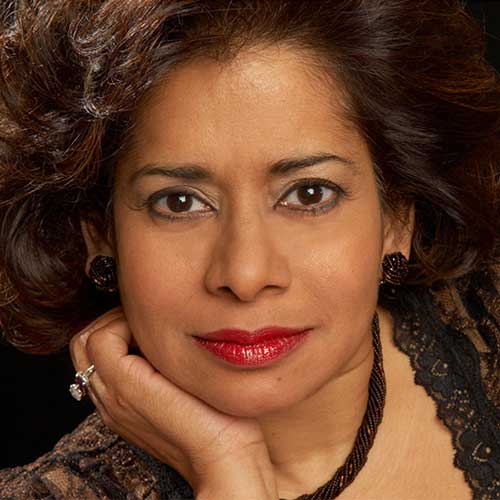 Born in Bombay, Patricia Rozario studied at London’s Guildhall School of Music, winning the Gold Medal and the Maggie Teyte Prize. She went on to the National Opera Studio in London and won prizes at the Mozarteum, s’Hertogenbosch, B&H and IYCAC International Singing Competitions. Since then her career has developed in opera, concert work, recording and broadcasting. Her unique voice and artistry has inspired over 15 of the world’s leading composers to write for her, notably Arvo Pärt and Sir John Tavener, who alone has now written over thirty works for her, making their collaboration unique in the contemporary field.

Her wide concert and opera repertoire ranges from baroque to contemporary music. She has given the premiere performances of many pieces written especially for her, by Pärt, Roxanna Panufnik, John Casken, Jonathan Dove, Simon Holt, Param Vir, John Woolrich, Errolyn Wallen, Andrew Gant and many by Tavener. She appears frequently at the BBC Proms.

Patricia teaches at the Royal College of Music and Trinity Laban in London. She is also in charge of the singing course at BIMF (www.bimf.co.uk), a UK summer music festival.

Patricia Rozario was awarded the OBE in the New Year’s Honours, 2001 the Asian Women’s Award for achievement in the Arts, 2002, the Global Goan Award, 2007 and in 2014 was made a Fellow of the Royal College of Music (FRCM), an award putting her alongside some of the greatest names in Classical Music. In 2020 she was awarded the Eastern Eye ACTA for contribution to the Arts.

In 2016 Patricia Rozario and Mark Troop musically inaugurated the newly refurbished Royal Opera House, Mumbai with a short recital for the Maharajah and Maharani of Gondal, the owners of the Opera House and their guests. In the following two seasons they produced two operas for the ROHM using all-Indian casts.

As a part of the Ongoing International Women’s Month, join Lorraine Aloysius & Aubrey Aloysius as they chat with Opera Icon (Soprano), PATRICIA ROZARIO from London, U.K. while she shares her inspiring music and amazing life journey on this unique Live Talk Show on Sunday 28-March-2021 @ 5:00 PM IST / @ 12:30 PM BST.